The scientific aim of ORACLE is the hydrological and biogeochemical functioning of sedimentary basins, in a rural anthropized environment. Multivariable and multi-scale observations of embedded catchments(1km² à 1800 km²)of the Paris basin are necessary for this research.
ORACLE provides the scientific basis necessary for management and control of risks related to extreme events (floods, droughts) and to anthropic impacts on streamflow and water quality, with a particular focus on agricultural activities. Anthropisation also contributes to increased risks and vulnerability of geographical areas. Only observation, with adapted width and duration, on various scales, from agricultural plot to catchment area, can answer these challenges.
ORACLE is made up of the “Petit Morin” and “Grand Morin” basins (Figure 1). The Morin rivers are the two principal tributaries of the Marne River. They have a direct influence on the flows, going from the Marne to the Seine until the Paris conurbation. The Orgeval catchment, observed since 1962 by INRAE is a sub-catchment of the “Grand Morin” basin (Figure 1). The Morin basins are primarily agricultural (80% agricultural, 15% forester, 5% urban), and consistent with field crop regions. Ground cover has remained relatively constant since it is under observation. 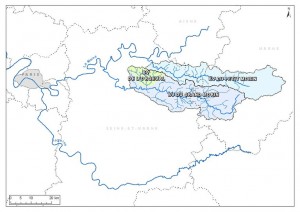 ORACLE, located on the Brie plateau (Brie limestones, lower Stampien), is covered by a quaternary loess deposit (up to 10 m thick). The upper layer is constituted of loess silt and the lower one is enriched in clay and sand (see map below). This silty glossic leached brown soil is characterized by low permeability resulting in temporary waterlogged soil in winter, and the presence of a perched aquifer. Soils are naturally poorly drained. Subsurface drainage (actually 60% of the territory) has been installed starting in the 1960s. Brie limestones (lower Stampien) constitute in a first aquifer of low depth (10 to 20 m), mainly fed by infiltration on the Brie plateau. It is an unconfined aquifer very vulnerable to agricultural pollution, because of an almost total absence of a roof protection. Brie limestones are separated from Champigny limestones (Ludien, upper Eocene aquifer, 20 to 30 m thickness) which level on valley sides, by green clay and supra-gypseous marls, a practically impermeable formation with variable thickness (8 to 22 cm). Champigny limestones constitute an aquifer with permeability and cracks, supplied by the valley sides, the porous zones and the pits. This aquifer is vulnerable near valleys. Limestones of Saint-Ouen, ORACLE deeper formation, form confined water, with infra-gypseous marls roof, which takes part in the supply of the Grand Morin river when it is not surmounted with alluvia (Coulommiers – Pommeuse). This aquifer becomes vulnerable when limstones of Saint-Ouen sub-level under the alluvia. The whole of the hydrological and hydrous compartments of ORACLE area are followed via a complete network of measurement: limnimetric stations at each outlet sub-catchments and in the drainage network, piezometric stations, precipitation stations distributed on the whole of ORACLE area and stations of grounds moisture in surface and in-depth. This device is doubled with a network of water quality measurement for surface run-off, rain and the water-table. 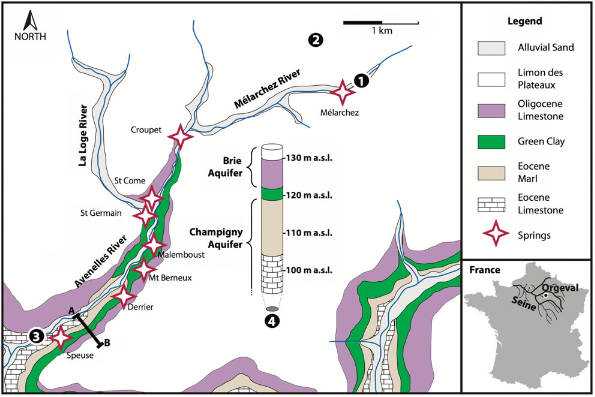 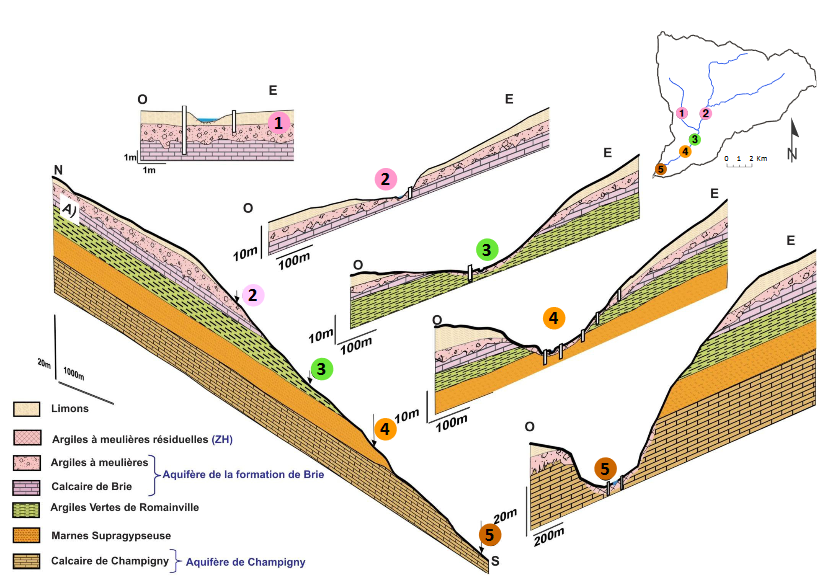 A network of « de basic » measurement is maintained permanently on ORACLE, in order not to stop chronicles. Length and continuity of certain time series on the long run are necessary to :

This basic data is acquired mainly by the DIREN Ile-de-France, Meteo-France and INRAE (Table 1).
Table 1 : ORACLE Data base